"For I know the plans I have for you," declares the Lord, "plans to prosper you and not to harm you, plans to give you hope and a future." Jeremiah 29: 11

Fuel and Fuel Filter Issues - for the engineers

I wrote this back in October 2018 but never got around to publishing it. it is now June 2019 but some (engineers) might find it interesting still.

Fuel has been causing me issues since I returned from vacation.

The main engine suction filters did not get done. No big deal. We sailed on the old ones and replaced them when we arrived in Conakry. The new ones were the same brand as the old and were a straight one for one replacement. No hot work - fantastic. The differential pressure alarms need connecting up but at least we disconnected the old ones so know which wires go where.

The main engine discharge filters were a different issue. These are an auto filter with a bypass filter. The shipyard had fitted these but only the fuel piping, none of the electrics, control air or alarms. In fact I found the control air connected to a drain line when I returned - not inspiring. I got this corrected and the control air connected correctly before we sailed. However the old cabling had just been sheared off so working out what was live, what was not, where it was supplied from and where to connect it was a bridge too far for the last 5 days of shipyard. We sailed on the bypass filter with no differential pressure alarms and the intention of fixing it in Guinea.

The four generators each had a set of duplex "knife" filters and we were replacing these with a set of Boll Filter 25 micron safety filters as recommended by MAN. The original filters did not have differential pressure indicators or alarms hence there were no cables from the generator rooms to the Engine Control Room. The new filters have both local differential pressure indicators and alarms. The alarms are not hooked up as we need to run cables. So more work to be done here. The shipyard did pipe in the new filters though.

We use two types of fuel for our generators - Diesel Oil (DO) and Heavy Fuel Oil (HFO). Diesel Oil is also known as Marine Gas Oil (MGO). The Heavy Fuel Oil comes in two types generally - HFO380 and IFO180. IFO stands for Intermediate Fuel Oil. Both are residual fuels, are black and nasty, and have to be heated up to make them thin enough (less viscous) to use in the diesel generators. The 380 and 180 numbers refer to centistokes (cSt) - a measure of viscosity. So HFO380 is thicker than IFO180. DO is the most expensive, IFO next and HFO cheapest. But the ease of use is proportional to the price. DO expensive and easy to use. HFO cheap and a lot more work - cleaning, filtering heating and potentially maintenance.

HFO looks like thick black treacle. The current batch we have when cold and in a bucket leaves a trench when you scoop some out. It does flow, but slowly. The Africa Mercy was built to operate on DO only so the HFO bunker tanks are converted DO bunker tanks and not heated. Likewise the service and settling tanks. The only way of heating our IFO/HFO is through the purifiers and then a fuel conditioning module before the generators.

In Cameroon, we were using IFO as HFO was not available. In shipyard we were using DO due to the tighter emisions laws in Europe - Las Palmas is part of Spain and thus subject to European laws. When we bunkered (loaded fuel) in Las Palmas we took on DO for the main engines for the sail and HFO380 for the generators for the field service.

Once we arrived in Guinea we changed over from DO to the last of the Cameroon IFO and then as this was consumed we started to blend in the Las Palmas HFO, something we have done in the past without issues. As soon as we started using IFO/HFO we started having issues with the new generator 25 micron fuel filters getting blocked. But as the alarms were not connected we had to rely on the watchkeepers seeing the local indicators, or observing the fuel temperature at the engine dropping or the last cylinder (5) exhaust temperature dropping, indicating it was starving for fuel. At this stage we were heating the fuel to about 124 degrees C so changing and cleaning fuel filters was a delicate process. After about 4 weeks we started to get more and more issues with blocked fuel filters. After a couple of preferntial trips and a blackout we switched to DO for four weeks until we received a new ultrasonic cleaner to help clean the filters.

Meanwhile we purified the fuel we had in our settling and service tanks and sent samples to be tested to ensure the purifiers were removing the contaminants. These are typically aluminium and silica "fines" - known as cat fines - which are used in the refining process as a catalyst. A maximum of 80 mg/kg is allowed but anything over 40 mg/kg is considered not good and you should be reducing them to 15 mg/kg. We were achieving 2 mg/kg so our purifiers were doing a good job

We tried switching back to HFO two weeks ago but we had issues all day with no visual indication of blockage but starving of fuel to the generators. We were also seeing a lot of brown foamy sludge when we changed filters. So we changed back to DO which is not so easy. The IFO/HFO was being heated to 135 degrees C to achieve 12 cSt. You can't just introduce DO at this temperature as it will vaporise - "gas up" - and fuel vapours do not compress and inject into engines well. So I had to lower the fuel temperature until a point when it was marginal for injecting due to the high viscosity and then introduce the DO. I got down to 113 degrees C and 45 cSt before I lost my nerve and switched over. I then spent a nervous hour monitoring the plant.

We transferred all the IFO/HFO from settling and service tanks to a spare bunker tank - quarantining it. We then opened and cleaned both tanks of the remaining sludge - a crappy job done by two of our fourth engineers and two ratings - and refilled with fresh HFO. By Sunday we were ready again to change over. Now this is also a tricky process but it all went smoothly. We had a few filter changes early on but that has reduced now and we have been running on HFO for a week with no preferential trips or blackouts. The fuel is required to be heated to 140 degrees C in order to achieve the required 12 cSt.

So what went wrong? I suspect we have had a compatibility issue between our two different residual fuels - the Cameroon IFO180 and the Las Palmas HFO380. This is a known phenomenum but not one I have experienced. Essentially the poor compatibility leads to asphaltene floculating and precipitating out of the fuel as sludge. Unfortunately once a fuel has broken down there is no way to reverse the process and precipitated asphaltene cannot be redisolved. So there is a fair chance we will have to dispose of the remaining mixed fuel and sludge. We did.

We also had an extra test done on our HFO380 and found that it contained trace amounts of fatty acids and phenyls. These are not supposed to be in the fuel at all but I do not think they contributed to our problems.

Postscript to this story. We battled with the quality of the HFO throughout our Guinea field service. However in May a dredger from Belgium contracted to dredge the port in Conakry loaded the local HFO we had been using in Guinea and had huge problems. It was re-assuring to me that it was not just us. 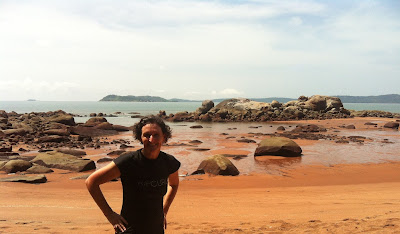 We've been in Conakry, Guinea for three months now and it has been a tough start up to the field service for us. This is year 6 for us and it has been over 2 years since we have been home to Australia so maybe that is part of it.
Anyway, all three boys are now in high school and this week had their school retreat. So Tam and I took a day and a half off mid week to have break on Ile de Kassa. We caught the ferry from the fishing port with a bikes at 2 pm. This was an adventure and a half as they manoeuvred the ferry and various fishing vessels around till eventually the ferry was tied outboard of an old hydrographic survey vessel. We and everyone else then clambered over the hydro ship onto the ferry with our bikes being passed over. The trip is only 5000 Guinea Francs which is 50 cents and takes about 20 minutes. Disembarking is as riotous with people climbing off wherever they like from both the upper and lower deck. 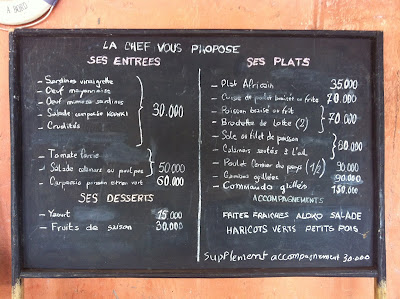 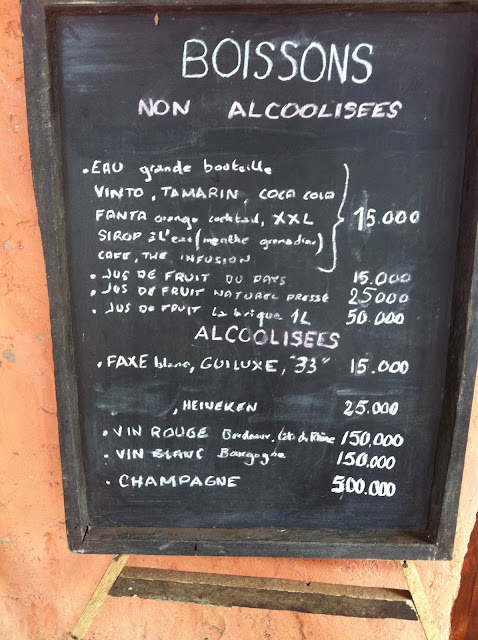 For dinner we both had grilled gambas which was magnificent and only about $9 each. We accompanied this with a room temperature chardonay, personally selected from the non functioning chest freezer which served as a drinks cabinet. The caretaker did not know what vin blanc was hence why I had to select. 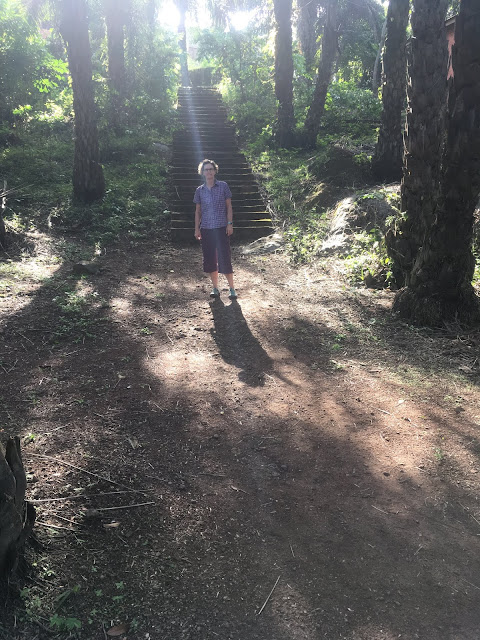 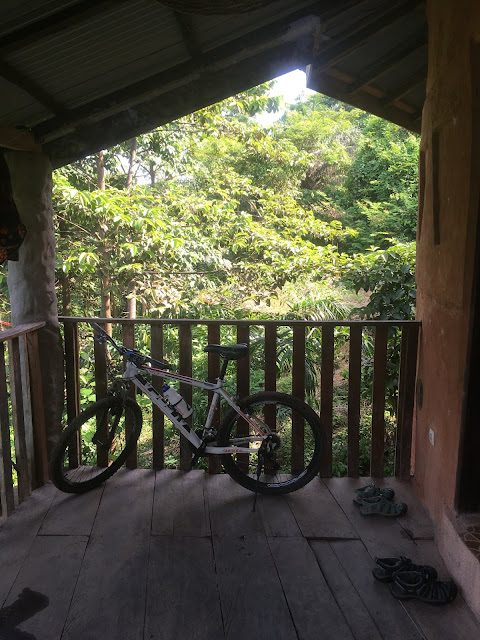 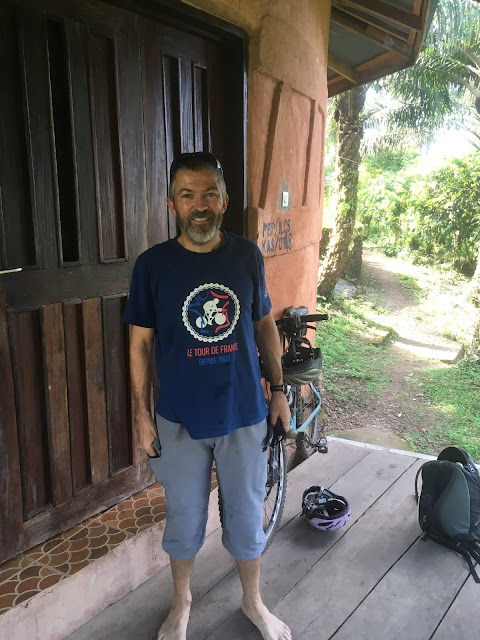 On Thursday we went exploring the island, riding to the north end where there is another nicer "resort" called Le Bamana but known as Abou's Place. 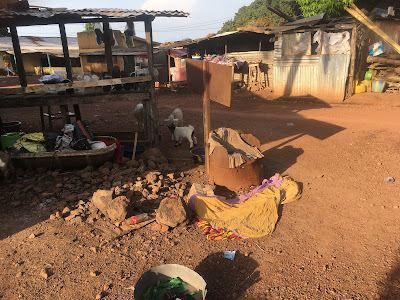 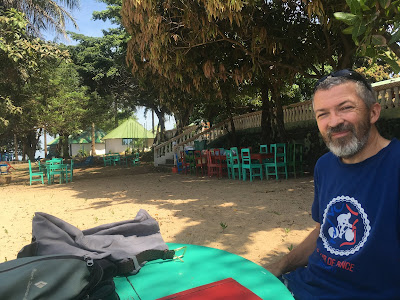 I had been told about a fresh water resevoir on the island that you could swim in and jump off a 10 metre cliff into so I went off on my bike to try and find it. After a few missed turns and asking some locals I found a very overgrown single track path that seemed to be heading in the right direction.


I didn't jump off the cliff as I was by myself but I did go for a very refreshing swim and checked the depth under the cliff which was deeper than I could dive. I'll be returning with the boys!! 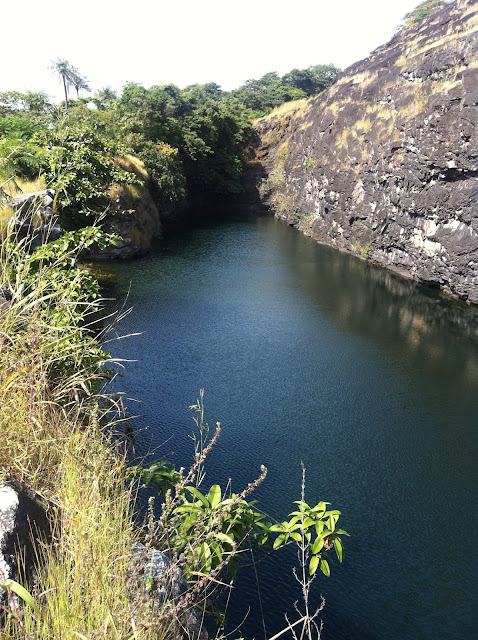 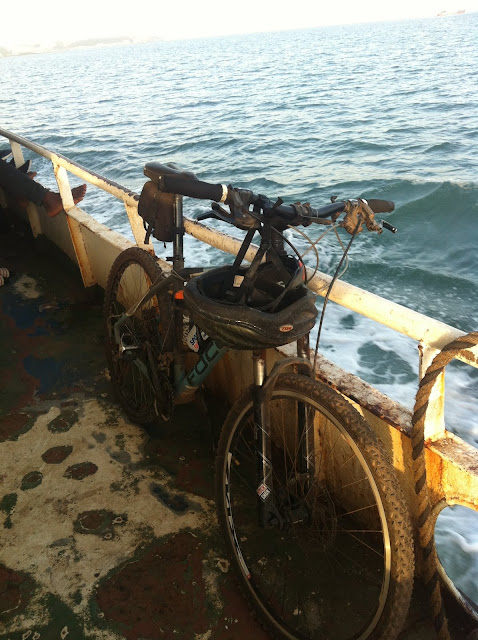 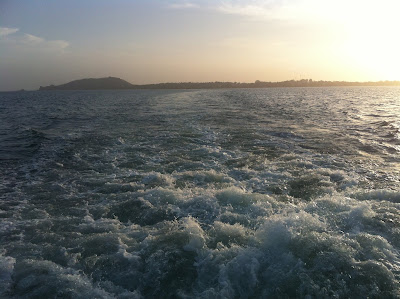 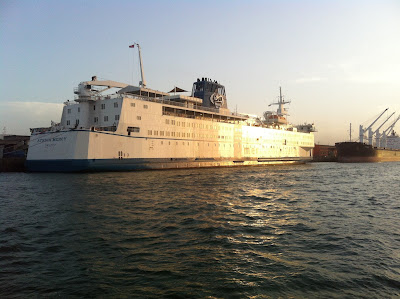 It was a great break away from our cabin on the ship. More than that, we got to chat with lots of the locals on Kassa and even handed out some flyers for eye and dental patient selection!  We stand out wherever we go - so this was a good thing when we saw people with cataracts.  Any conversation - no matter how bad our French was - we were still able to explain where and when the patient selections are held for dental and eyes.  Having come across at least 5 people in our 24 hours there, we are again reminded of the need for life changing surgery and healthcare.  And grateful for being part of it's provision in Guinea by Mercy Ships

Mercy Ships is an international charity, operating hospital ships in the poorest countries of the world. More information can be found at the web site http://www.mercyships.org/


Disclaimer:
We will be serving with Mercy Ships. However, everything in this blog is our personal opinion and is not read or approved before it is posted. Opinions, conclusions and other information expressed here do not necessarily reflect the views of Mercy Ships.

Links to Video Tour of the Ship - MV Africa Mercy